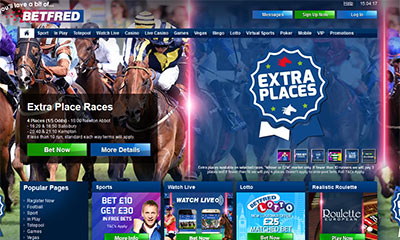 Betfred began life with a single betting shop in the borough of Salford, Manchester back in 1967. Since then, the company founded by brothers Fred and Peter Done, has grown to become one of the most familiar and popular brands in the UK.

From such humble beginnings, Betfred now owns over 1,300 betting shops and also has a significant online presence. Their reputation as a good employer has not dwindled over the years and they are a regular name at the top of the North West Business rankings.

They have grown their brand through popular sponsorship initiatives and are the main backers of the Rugby League Super League, the World Snooker Championship and the Scottish Football League Cup. They are also a big name in horse and greyhound racing sponsorship.

Betfred gained national exposure in the UK back in 1998 when they became the first bookmaker to make an early pay-out when Manchester United looked to be on course for the Premier League title. However, the plan backfired somewhat when Arsenal eventually beat United to the title. Despite this setback, Betfred went on to make further early pay-outs and got stung again in 2012 when Manchester United were once again pipped to the Premier League title - this time by their arch rivals Manchester City.

Other significant events in the history of Betfred include the 2011 purchase of the Tote betting pool for £265 million. The controversial move came on the back of promises from the company that they would invest significant funds in UK horse racing over a 7 year period and set up a Tote Racing Development Board. Like many bookmakers, Betfred operates on a license issued by the Government of Gibraltar and is regulated by both the Gibraltar Gambling Commissioner and the UK Gaming Commission.

Banking with Betfred is fairly straightforward. They do not offer as many options as heavy hitters like Bet365 but the most popular funding options are supported including PayPal.

Depending on your country of residence, Betfred offers many different funding and withdrawal methods including:

As is often the case, deposits and withdrawals are handled by third party companies. Each of these operators may have its own restrictions on the size of individual transactions.

The choice of sports events and markets on the Betfred website may not be quite as comprehensive as those offered by Bet365 but there is still a huge amount of choice. In fact most punters probably would not notice the difference.

In the past, the live in-play section of the website has fallen short of similar services offered by the big players such as Bet365. However, they have moved to improve this in recent months. The match stats and information suite is still rather limited but actually placing bets is fast and straightforward. Despite the improvements, you can’t help but feel that they could attract even more bets with further updates to this platform.

When it comes to attracting punters, Betfred uses smart initiatives like their Goals Galore campaign to get punters involved. This hugely popular option allows punters to select games in which they believe both teams will score a goal. They have even created a special mobile application just for this bet type. They also have an online messenger app that allows clients to place their bets automatically by sending a simple text message. This provides the ultimate in betting convenience.

The final jewel in Betfred’s crown is the Totepool which they acquired in 2011. This popular betting pool service is synonymous with UK horse racing and has given Betfred a huge footing within the industry. The Totepool Placepot remains one of the most popular bet types in UK and Irish horse racing and can be wagered every day via Betfred’s Totepool portal.

Betfred are well known for their range of bonuses and promotions. New customers who bet £10 will get £30 in free bets credited to their account within 48 hours of the first bet being settled. Once the customer has wagered the total value of the free bet, any winnings may be withdrawn.

This year marks the 50th anniversary of Betfred and they are rolling out plenty of other promotions throughout 2017 to keep eager punters satisfied. All the details are published in the promotions section of their website.

Other bonuses that caught the eye are the Double Delight and Hat-trick Heaven offers on football matches. If a punter successfully backs a player to score first and they score again, Betfred will double the odds. If they score a third, the odds are trebled. This offer is also available in-play in the next goal scorer market. At the time of writing, there were at least 12 other bonuses available across the sports and horse racing markets.

Betfred have always had a good reputation when it comes to customer service. In fact, many punters have stuck with them for this reason alone. From their time as a high street-only bookmaker through to their transition as a major player online, their customers have always rated them highly.

You can also select the Live Help option which pops up on every page of the website. Each contact option is split into categories to make sure you get an advisor in that particular field. As usual, many common questions can be answered quickly in the comprehensive FAQs section to avoid the need for any further contact.

Betfred may seem like they are playing catch up at times, especially when it comes to online betting, but they have been around for a long time and have a very loyal customer base. While others may set the pace when it comes to new technology like live in-play wagering, Betfred make sure that they are never far behind. What’s more, they have a great reputation for customer service, offer very attractive bonuses and have enough betting options to keep most regular punters satisfied. For many bettors, they remain the go-to bookie for horse racing, football and other major sports.

On top of all this, they offer a range of apps and betting initiatives that are actually quite innovative and put some of the bigger companies to shame. One thing is sure, they understand punters and are an integral part of the UK betting fabric.

On that basis, Betfred should definitely be on your list of UK betting accounts.